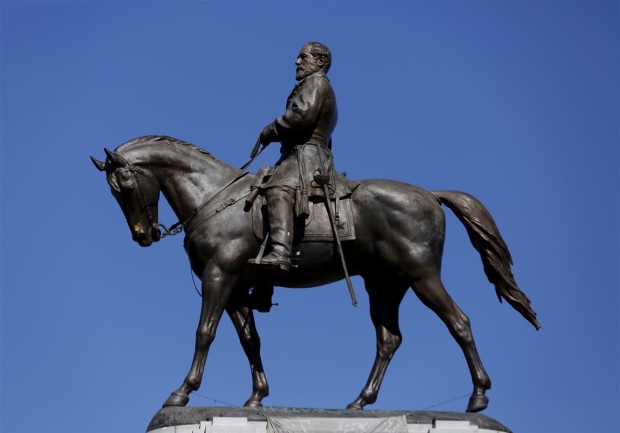 On September 8, 2021, a 21-foot-tall statue of Confederate General Robert E. Lee, which sat upon a graffiti-covered 40-foot-tall base, was removed from a traffic circle on Monument Avenue in Richmond, Virginia. Governor Ralph Northam had wanted to take Lee’s statue down previously, but lawsuits prevented the removal until a recent decision by the Virginia Supreme Court. As of now, the pedestal is staying. According to an NPR article https://www.npr.org/2021/09/08/1035085412/robert-e-lee-statue-down-in-virginia-artifacts-time-capsule-richmond, the base will contain a new time capsule. It will have inside it various items, including a photo of a Black ballerina in front of the statue, a Kente cloth worn at the 400th commemoration of 1619, a “Black Lives Matter” sticker, “Stop Asian Hate” fliers, an LGBTQ pin, and an expired vial of Pfizer’s COVID-19 vaccine.

What are we to think of all this? The first place that my mind goes to is the Cultural Revolution in China under Mao Zedong. In the Four Olds campaign, young Red guards destroyed Old Ideas, Old Habits, Old Culture, and Old Customs. Anything before communist rule had to go. So those who tear down statues have a lot in common with communists. If there is doubt about this, just look at what and who will be replacing Lee–marxist ideas and personalities.

It is sad to think of the loss of culture and heritage to the city of Richmond by these actions. Richmond was the capital of the Confederate States of America during the Civil War. Obviously, Lee was from Virginia. So this is local, as well as national, history that is being lost.

“Every record has been destroyed or falsified, every book has been rewritten, every picture has been repainted, every statue and street and building has been renamed, every date has been altered. And that process is continuing day by day and minute by minute. History has stopped.” 1984, George Orwell

It is also shortsighted, simplistic, and spurious to write off Lee as a racist or a bad person. Those who have studied Lee know that he was an honorable man of great skill as a general, as well as a man of noble character. One of the main reasons why he turned down an offer to lead the Union army was that he did not want to take up arms against his home state of Virginia. Contrast the honor and character of Lee with the vulgar graffiti found on the statue’s base. Who has more character? One of the most skilled generals in American history or some punk who spray-painted obscenities on the base of the statue?

“Save in the defense of my native State, I never desire again to draw my sword.” -Robert E. Lee in a letter to his friend, General Winfield Scott

And just so my position on the Civil War is not misunderstood, let me explain my views on it. I love studying history, and I can appreciate that there were good people on both sides. I identify with the abolitionism of the North, but I also appreciate the states’ rights argument of the South. In addition, I realize that history is not always as simple or clear-cut as we would like it to be. It is often very messy. For example, Abraham Lincoln made plenty of statements that cast doubt on whether he wanted to abolish slavery at all. His primary concern, at least in the beginning of the war, was to preserve the Union. And you can find similar sentiments by other Northerners, such as General William T. Sherman. And in contrast to those examples, you can find evidence that Lee was more enlightened on racial matters in some instances than his Northern counterparts.

So why do I oppose the removal of Lee’s statue? The bottom line is that I dislike the erasing of history and tearing down of monuments that are central to a place’s identity and heritage. Think about it. Will ignorance of the past by our youth lead to a more enlightened society? Did not the statue educate and provoke discussion of the past simply by its existence there on Monument Avenue? Now that Lee is being cancelled, I’m sure that many youth in Richmond will grow up being unaware of who he even was and what role he played in the history of our country. Then you can ask yourself, “Who can better articulate the history of race in America? Those who know the history of the Civil War and the personalities on both sides or those who are ignorant of the other side’s heroes?”