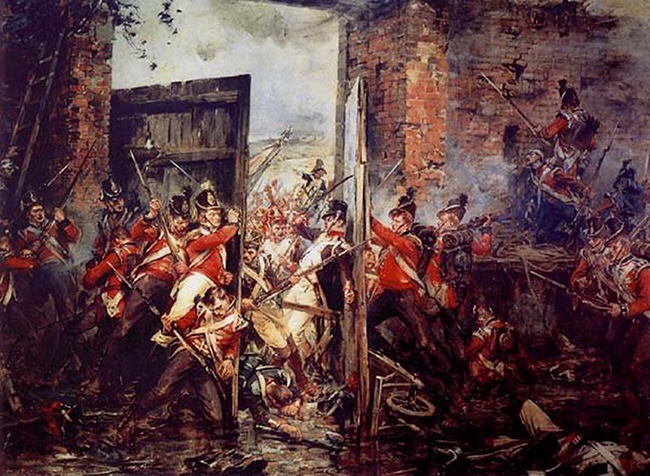 Above: The Anglo-Allied Army defending the gates of Hougoumont against a French offensive during the Battle of Waterloo. The Duke of Wellington called this the decisive moment of the battle.

Scholars, history buffs, and Bonapartists have debated for over 200 years why Napoleon lost the Battle of Waterloo on June 18, 1815. The Duke of Wellington called it the “nearest run thing you ever saw,” indicating that the battle could have gone either way. Hindsight is 20/20, and it is human nature to examine what went wrong and imagine counterfactuals. In reality, there are many reasons why Napoleon lost the battle. This brief article will examine a few of them.

First, Napoleon was overconfident and underestimated Wellington. Napoleon told Soult and his generals that Wellington was a “bad general” and that the English were “bad troops.” He went on to say that the battle would be “a lunchtime affair.”

In fact, Wellington and Blucher outperformed and outsmarted Napoleon. Wellington was wise in his choice of ground. He placed his men behind a small ridge which helped to protect them from artillery fire. Wellington’s right flank was protected by the farmhouse at Hougoumont, his center by La Haie Sainte, and his left flank by the farm at Papelotte.

Napoleon also underestimated the Prussians. He thought Blucher’s troops were in worse shape than they actually were after the Battle of Ligny on June 16. And Napoleon ignored intelligence by his brother Jerome that Blucher and Wellington would link up. Napoleon expected Blucher to head east, not west.

While the Allied leaders performed well, two of Napoleon’s marshals, Ney and Grouchy, underperformed. Napoleon should have picked Davout, his best marshal, to help him at Waterloo. Instead he was guarding Paris as Minister of War. Ney was an excellent marshal, but his loyalty was in question in light of his support of the Bourbons after Leipzig. He switched sides to support Napoleon in the Waterloo Campaign, but he made some key errors during the battle. Other valuable personnel who could have supported Napoleon at Waterloo were not available–Berthier, Massena, and Murat (Berthier was disillusioned and eventually fell from a window; Massena remained neutral; and Murat had betrayed Napoleon after Leipzig to save his throne).

Napoleon himself made several errors as well. In the days before the battle at Quatre Bras and Ligny, communication problems plagued Napoleon’s forces. D’Erlon’s reserve corp spent July 16 going back and forth between the left wing and right wing, which ensured that his forces didn’t arrive at either battle in time. Napoleon also lost the initiative due to inaction between 9 p.m. on the 16th and 9 a.m. on the 17th. Thus, Napoleon was unable to capitalize on the last battlefield victory of his career at Ligny. On the day before the battle, Napoleon split his forces, which went against his own maxims of warfare. He also delayed ordering Grouchy, who was effectively neutralized by fighting the Prussian rearguard in a sideshow at Wavre, to join the battle.

Napoleon was also relying upon a faulty map of the battlefield. A printing error was responsible for the confusion. As a result, Napoleon did not have a good sense of the lay of the land.

In addition, Napoleon was sleep-deprived and fatigued. The night before he had not gotten much sleep due to constant interruptions of his men bringing him reports. It is also likely that he was suffering from a painful case of hemorrhoids during the battle. Physically, he was not at the top of his game to say the least.

Perhaps one of the most crucial mistakes committed by Napoleon was to delay action on the morning of the battle. The late start (11p.m.) dearly cost the French valuable time that they could not afford to lose. It had rained the day before, and Drouot had suggested waiting to let the ground dry for the artillery. These lost hours allowed the Prussians to join the battle later in the afternoon. Once the Prussians arrived, the battle was essentially over.

The battle itself was filled with missteps by the French. The various branches did not coordinate with each other. Ney sent a cavalry charge at Wellington’s center around 4 p.m., but he did not support it with artillery or infantry. Wellington’s forces formed impregnable squares, and the cavalry charge had to be called off. Then when Ney captured La Haie Sante around 6:30 p.m., Napoleon waited too long to send in the Old Guard, and the momentum was lost. For someone who was known for his speed and taking quick, decisive actions to gain the upper hand against the enemy, Napoleon seemed lethargic and reactionary during the Waterloo Campaign. In all fairness, Napoleon was almost 46 years old, and it had been 10 years since Austerlitz. There had been a lot of water under the bridge.

Perhaps the best explanation for his loss at Waterloo is from Napoleon himself:

“I sensed that Fortune was abandoning me. I no longer had in me the feeling of ultimate success, and if one is not prepared to take risks when the time is ripe, one ends up doing nothing.”

Throughout his career, Napoleon referenced “destiny.” As a wedding gift, Napoleon even gave Josephine a gold enameled medallion engraved with the words, “To Destiny.” After he divorced Josephine and the losses began to mount (especially in Russia), Napoleon started to suspect that Fate had turned against him. Whereas earlier in his career, Napoleon was a bold, decisive, risk-taker, by the time of Waterloo he had become indecisive, tired, and less induced to take those risks “when the time was ripe.”

“There is a moment in combat when the slightest maneuver is decisive and gives superiority; it is the drop of water that starts the overflow .”

It’s clear that at Waterloo, Napoleon let that moment slip by.

Writer. View all posts by wesleyprovine